South Wales was the destination for the Burnley side in 1960 with a fourth round FA Cup tie against Second Division side Swansea Town.

There had been good news in town with the Ministry of Transport giving the go ahead for a start to be made on a 250-yard stretch of Burnley’s new inner ring road and that a 75% grant had been awarded, the value of which was £238,000. The stretch of the road (shown above) is the stretch from Church Street to Grimshaw Street and it was hoped that at a future date the road could be continued (again as shown) where the canal would be crossed by a fly-over bridge.

The news meant that Burnley’s new central road network was a stage nearer reality; the builders of the new Keirby Hotel were delighted that soon their luxury premises would be seen in a more fitting setting; it brought to an end the future of Sion Baptist Church and school, which, together with the Yorkshire Hotel were to be raised to make way for the improvement. Provision was also made for link roads to connect the new roundabout with St. James’ Street and Yorkshire Street whilst news came that a new bus station could be built flanking one side of the inner ring road. 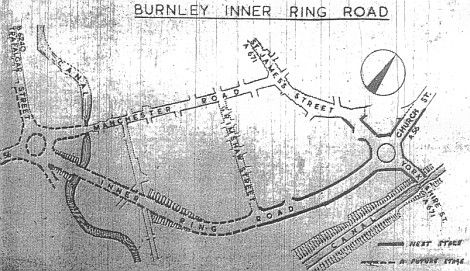 Whilst the town was celebrating that news there was fun for 70 Burnley youngsters who got a special treat when they visited the circus at Belle Vue. Before attending the show the children found themselves centre stage in an ATV television programme entitled “Let’s Go” with three of them invited to collaborate with the clowns. Employees of Butterworth & Dickinson (Butts & Dicks), the parents of the children, saw them on television with all those from Burnley to the fore. And the kids got to go to the normal circus show afterwards and were all treated to ice cream.

There was an interesting job advert in the local press for a new Chief Constable. Mr R. A. Noble GM had left the town to take up a similar position in Derby and applications had been invited to fill the role. A shortlist had been forwarded to the Home Office for approval but none of the names were divulged.

Some Burnley police officers had been busy in trying to capture one 24 year-old Burnley man. They finally succeeded and the court was told that he had indulged in a ‘riot of crime’. The man, a cinema attendant, begged the court for another chance via a letter he handed to the Bench. It read: “I want to finish with this sort of life. I have done my best to co-operate with the police and clear everything up. I have a job at a local dance hall and a grand girl who I am going to marry as soon as possible.” Detective Inspector J. Rushton told the court that the girl’s name had not been divulged and there was no evidence that the accused was to be married. He also confirmed that the accused did not have a job at a dance hall. He was charged with breaking into and stealing from two cars and of stealing a pair of boots to the value of £8 from a shoe shop. He asked for 25 other offences to be taken into consideration. DI Rushton said he had been to borstal in 1953 and had served six months imprisonment in the first half of 1959. Despite all his promises this was his second court appearance, on different charges, in just two weeks. Despite his letter, he was committed in custody for sentencing at the next Burnley Quarter Sessions.

Burnley on a Saturday night was apparently no place to be in 1960 and two incidents the previous week had brought about some concern. The first of them centred on four youths who caused a disturbance at 11:00 p.m. There were violent scenes and a policeman was struck by two youths. Pedestrians were obstructed and jostled by a crowd of youths with all of this taking place outside the Palace in St. James Street. So these young men were all fined between £2 and £5 and Mr G. Parkinson (presiding) told them: “We are not going to stand for this rowdyism which goes on in the centre of town on Saturday night. We won’t have assaults on the police. That is a crime we cannot countenance.”

In another incident a bus driver and conductor were assaulted. They’d parked their bus by the library and were on their way back to it and passing the White Lion when they were set upon by two men. Despite bleeding profusely after the attack the driver told the conductor they had to get the bus out and they were able to take it on the Colne Road service. The two men who caused the attack were both fined £2 10s by the court.

On the local sports front there was good news for the cricket playing pupils at Burnley Grammar School. The school had relocated to new premises at Byron Street and for the 1961 summer they would have a brand new cricket pavilion. This was being purchased for them by the school’s Old Boys Association. Over 400 members of the association had raised the £1,126 for the build of the pavilion which had been designed by an old boy of the school.

Onto Burnley Football Club, and there was a nice touch at the reserve game against West Brom in the previous week. We drew the game 1-1 with Ronnie Fenton scoring in what was Colin McDonald’s first appearance at Turf Moor since his broken leg. At half time the enclosure members expressed the wishes of all when they presented him with a ‘welcome back’ bouquet and a round of handshakes. The wishes were accepted with thanks by the England goalkeeper.

The Burnley players had been in Blackpool all week undergoing special cup training. They left Turf Moor on Monday and the party included all those who had played against West Brom with the exception of Ian Lawson who had rejoined his Royal Engineers unit at Chatham. Added to the other ten players were Jimmy McIlroy and Brian Pilkington (both injured for the West Brom game), John Talbut, Tommy Cummings and Billy White. They were accompanied by manager Mr Harry Potts, Mr Ray Bennion (trainer) and Mr Billy Dougall (physiotherapist).

Whilst the team went directly from Blackpool the fans went by road, rail and even air. Standerwick ran coaches at a cost of £1 5s return whilst the train cost £1 12s with and extra £1 4s 3d for lunch and dinner. Members of the Burnley Calder Vale Motor Club had chartered a Dakota Silver City plane at a cost of £5 13s per passenger. Mrs Sarah Bratt, Burnley’s laundress, was also making the journey. Swansea born, Mrs Bratt had ironed a special cup rosette to wear at the game (claret and blue of course).

Those Burnley supporters came home partly disappointed with the proceedings but delighted to be in the fifth round draw after we drew the game 0-0. This was the story of the Great Squelch at Vetch Field on a day of drizzle, preceded by the singing of massed Welsh choirs (on records), and the cheers and counter cheers of massed supporters who broke the ground record in numbers but not receipts.

After receiving instructions to alter their arrangements and leave the overnight headquarters at Porthcawl much earlier than intended, in view of the traffic and the Port Talbot ‘bottleneck’ the team arrived at Swansea in style with a police escort and then made their way to the ground.

The game proved to be hard graft throughout and a draw a fair result to a match which will be remembered in the Valleys and talked about over in the Hills. It must not be forgotten that the only team to get the ball in the net were Swansea, fortunately Reg Davies was offside. For Burnley the prevailing memory will be of mud, and the tremendous, whole hearted roaring support of the South Welsh for the Swans. Turf Moor customers needed to take note.