Clarets in top three after win at Halifax

Burnley just kept on winning in 1991. We’d won league games against Carlisle, Wrexham, Walsall and Lincoln and an Autoglass Trophy game at Blackpool and now we added another win, this time a 2-0 victory at Halifax which took us into third place in the table.

Last week we brought news of a 66-year-old man from Ribchester Avenue in Burnley who had been the victim of grievous bodily harm outside his house. Initially he seemed to be on the road to recovery but suffered a relapse and, with his family keeping a constant vigil, he sadly passed away in Royal Preston Hospital. A 26-year-old man had already appeared in court. 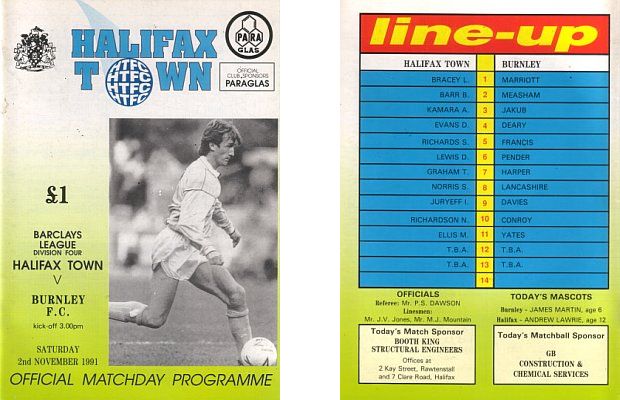 David France, owner of the soon to be opened Kitty O’Shea’s Good Time Emporium, had been the victim of a shooting. He was recovering, although in need of more treatment, and had received further good news when Burnley Borough Council granted him an entertainment licence for the new night spot as well as a one hour extension on Thursday, Friday and nights.

We had another poll tax jailing. This time it was Steve Austin (29), owner of Hen’s Nest Mini Market in Gannow Lane. He had failed to pay £299 due in the previous year and was sent down for 14 days. His common law wife Barbara said he could afford it but had refused solely on principle in support of those who could not afford. So he could afford it! I’m sure he’d be able to rebuild his life and business on release although there was no confirmation that he might be worth six million dollars.

Back in the magistrates court was the Padiham man who was charged with marital rape, the first such case in the country. If you recall, he was allowed out on bail provided he resided in a Blackburn hostel. Now, the courts allowed him home after his wife, who brought the charges initially, said she would like him back. Solicitor Basil Dearing, free from defending football hooligans, told the court: “There is a great deal of goodwill on both sides and there is a real hope there may be a reconciliation.”

There was some alarming news about former Turf Moor favourite Brian O’Neil as reports arrived that he was recovering in his native North East following a road accident. By now 47, O’Neil had been paralysed down one side as a result of his injuries and had spent some time in intensive care before being moved to a general ward. He was by then receiving further treatment and physiotherapy in an Ashington hospital who were inundated with well wishes from Burnley supporters.

Just three days ahead of Guy Fawkes Night, it was confirmed that Miss Burnley would be lighting the community bonfire on Fulledge Recreation Ground in what had become one of the town’s biggest annual events.

Asda announced that they were moving into Burnley and said their new store would be open in the Stoneyholme area by mid 1992. They would, they said, be very competitive price wise. Would that be as cheap as Farmfoods? They had 2ltr bottles of Cola at 39p, six meat and potato pies for 99p and for just 69p a six portion gateau.

Finally there was news from the Mechanics. The council had agreed to a three week trial for shuttle to become chuckle, by giving permission for three comedy club nights to be held in the Shuttle Bar. That followed the staging by local children of a ‘Disposable Drama Workshop’ showing what could be done with recycled goods. It was all organised by Nicky Maynard. It’s surprising the things strikers do before taking up football.

As for football; things were just getting better and better. We set off for Halifax in seventh place in the league, came home with a 2-0 win with not one of those six teams who started the day above us winning.

The team showed just one change from that which beat Lincoln City a week earlier. Again Ian Measham was ruled out and Paul France came in at right back. As for Jimmy Mullen, he took his place in the dug out for this game having astonishingly been overlooked for the October Manager of the Month Award despite a 100% record. It had gone to Mansfield’s George Foster simply because they were top of the league, although, to be fair, they had matched our month with four wins from four games.

Football is usually 11 v 11. This game didn’t end that way and it might not have started that way either when Roger Eli inadvertently joined the Halifax players on the pitch rather than his own team mates. “The two teams were walking out and I actually followed the Halifax team out to their end,” the Clarets’ striker said. “When I noticed, I was so embarrassed but I managed to just sneak back into our end.”

Thankfully he was on the right side of the pitch at kick off as Burnley really showed their promotion credentials with a well earned three points against a lowly Halifax team who made it difficult for us. It was all Burnley in the first half. We won no less than ten corners and any number of free kicks but we just couldn’t get the breakthrough despite dominating proceedings. Andy Marriott, in the Burnley goal, was, for the most part, a virtual spectator whilst his opposite number Lee Bracey was kept very busy.

Eight minutes before half time, yet another foul saw Eli suffer an ankle injury that forced him off with Graham Lancashire coming on as a substitute but we went in level at 0-0 with all the excitement to come in the second half.

Just ten minutes after the break came the breakthrough. Steve Davis played Lancashire through and with a clear run on goal he was upended by Town’s 20-year-old defender Chris Lucketti. Referee Paul Danson didn’t hesitate. Out came the red card for Lucketti as Burnley won a free kick. Joe Jakub pushed the ball forward to John DEARY. Initially it looked as though he was going to play the ball to Steve Harper but he turned, by-passed two defenders and hit a shot from the edge of the box past Bracey and into the Halifax net for his first goal of the season.

Halifax really had no answer now, other than to continue giving free kicks away and with twelve minutes to go it got even worse for the home side. Lancashire played the ball to France who galloped into the Halifax half only to be brought down by Tommy Graham. Out came Danson’s red card again and Halifax were down to nine men.

That was it, there was no way back for them and Andy FARRELL completed the scoring three minutes from time. The midfielder was suffering from a double fracture of the left cheek bone but played despite the problems and got his reward, joining Deary with a first goal of the season when he got onto a cross from Mike Conroy.

The Burnley fans were joyous. Mullen had come in and no less than fifteen points had been won from five games. With all the results going for us, it saw us end the day in third place, an automatic promotion position.

Supporters were hesitant in believing that a promotion season could be on the cards. We’d seen good starts in previous seasons that had come to nothing and in the previous season it ended in disappointment in the play offs, but things were really beginning to look up for us.

We really couldn’t have wished for better results and the best of the lot probably came at Field Mill where bottom club Doncaster held leaders Mansfield to a 2-2 draw. Added to that, second place Barnet went down 1-0 at Wrexham and Blackpool could only draw with lowly Scarborough.

We’d gone above both Rotherham United and Blackpool on goal difference but were still four points behind Barnet and five behind leaders Mansfield who were due at Turf Moor seven days later. Before that we had a midweek home game against York who had also had a good day, beating Walsall 2-0 with goals from Shaun Reid and Wayne Hall.