Richard Nartey and Calen Gallagher-Allison, defenders signed by Burnley from Chelsea and Manchester United respectively, were both released by the Clarets at the end of last season and both have now found new clubs. 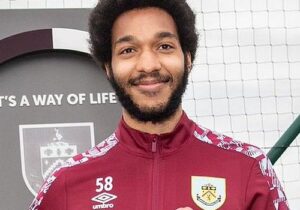 Nartey (pictured top) had Football League experience before joining the Clarets two years ago having spent the previous season on loan from Chelsea at Burton. He had an outstanding first season at Burnley, playing for the under-23s before joining Mansfield on loan at the start of last season, re-joining Nigel Clough who had been at Burton during his loan there.

Unfortunately, injuries hit and he made just three appearances for them. It was reported in January that he was no longer in Clough’s plans but remained there on loan with Burnley reluctant to recall him although he was permitted to play for our under-23s.

Richard has been on trial with Salford and yesterday signed a one-year deal with the League Two club. When he played a pre-season game for them, he was listed as ‘trialist wearing 25’ and he’s opted to keep that number. 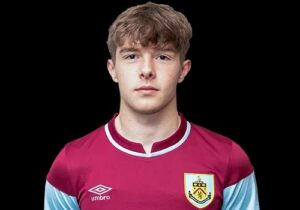 He said: “I’m really happy to just get it over the line. I’ve been here for a week and a half now so I’ve met the lads and everything already and after the first couple of days I knew that I wanted to be here. As soon as I came here, met the lads, the philosophy and how the Gaffer wants us to play, I think it just suited how I’ve grown up and I feel motivated that we can push and do really well this season.”

Today, Gallagher-Allison (pictured bottom) has moved into non-league football with Lancaster City. He signed for Burnley part way through the 2020/21 season, coming in from Manchester United alongside Owen Dodgson. He played a number of games last season but in 2021/22 we saw very little of him, be it through injury or just not being selected we don’t know.

There’s a Burnley link at Lancaster with Graham Lancashire there as assistant manager and Allison has become their eighth signing of the summer.

We wish both of them well at their new clubs.