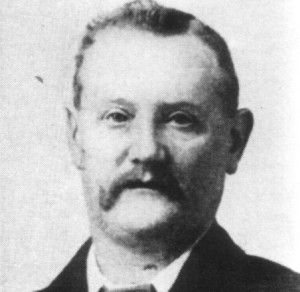 Harry Bradshaw joined Burnley Football Club in 1891 as secretary but became chairman after the club’s first manager, Arthur Sutcliffe, had succeeded him as secretary and Bradshaw succeeded Sutcliffe again, this time into the manager’s chair. He replaced Sutcliffe in the summer of 1896 although he did not have the best starts as Burnley manager. In his very first season in charge Burnley finished bottom of the First Division and that led to the playing of Test Matches which ended in our first ever relegation.

Faced with Second Division football for the first time, Bradshaw improved the team with the signings of Jimmy Ross and Wilf Toman. These two players scored no fewer than 38 league goals between them and saw Burnley immediately go back to the top league, finishing as Champions. We were promoted through the Test Matches, clinched with two wins over Blackburn Rovers, and with the league expanded second place Newcastle United were also promoted.

Bradshaw ensured there would be no instant relegation and no return to the Second Division. He signed young defender Fred Barron from Stockton who he went on to play 400 league games for the club. Just a few weeks into the season he brought back goalkeeper Jack Hillman. It became a good season for Burnley and ended with a third place finish, the club claiming its highest placing since the introduction of the Football League eleven years earlier.

Hopes were high that Bradshaw could lead Burnley to a first ever Championship but in the summer of 1899, after three years in charge, he moved on to become manager of Woolwich Arsenal, then in Division Two. He led them to promotion five years later before taking over at Fulham, again with success, leading them from the Southern League into the Football League. His association with Fulham ended in 1909 although his son Joe later managed them for three seasons in the 1920s.

On leaving Fulham, Harry Bradshaw became secretary of the Southern League, a position he held until his death in 1921 at the age of 68.