Mullen’s Burnley get another win at Lincoln

What an amazing turnaround. Jimmy Mullen was appointed as the new Burnley manager after wins against Carlisle and Wrexham as caretaker, and he then followed it up with wins against Walsall in the league and Blackpool in the Autoglass Trophy before making it five out of five with a 3-0 league win at Lincoln.

It had been another concerning week in Burnley with a shooting, an old lady facing an intruder, a man in hospital after being the victim of grievous bodily harm and a 17-year-old found guilty of rape. 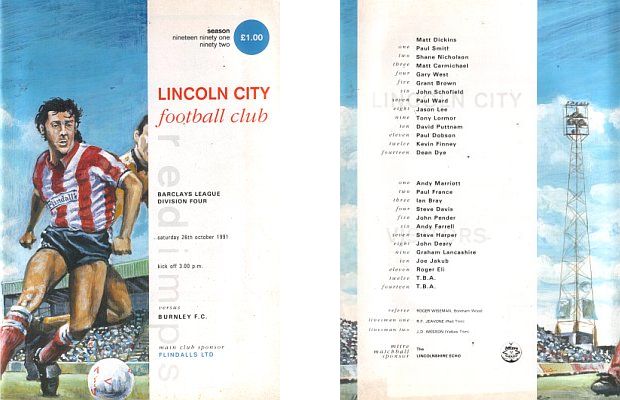 Everyone was getting ready for the grand opening of KITTY O’SHEA’S GOOD TIME EMPORIUM. It was all set to open on Trafalgar Street when the owner of Burnley newest night spot was gunned down. David France, 31 years of age, was found there and rushed to Burnley General Hospital suffering from gunshot wounds to his left leg. At the time of the incident he was just completing the refurbishment of the former Hop with his partner Paul Johnson. Police said the injuries were not serious and he was reported to be comfortable.

If that wasn’t bad enough there was awful news when a lady of 77 was left in a very poor state after she was woken in her bed by an intruder who had his hand over her mouth. It had left her very upset and confused and she was having to live with relatives. The man the police were looking for was believed to be in his late 20s but the lady was so confused that she wasn’t even able to tell the police what items had been stolen.

Meanwhile, a man of 66 from Ribchester Avenue was left very poorly after suffering injuries outside his home inflicted by a young man of 25 who, as a result, had been sent to the Crown Court. And the worst of the lot, a 17-year-old was given two years in a young offenders institution after being found guilty of raping a 14-year-old girl whilst his mates, who pleaded with him to stop, watched on.

There had to be some good news and it came with a big boost for the town with a major investment to be put into the Weavers’ Triangle and the Leeds & Liverpool Canal. The news was part of a £30 million plan to make the canal a major tourist attraction. The plans, it was said, would take a decade to complete but for entertainment immediately there was a Radio Lancashire evening on gardening in Worsthorne and if that didn’t tickle your fancy there was a Gas Road Show in town enabling residents to go and ask their gas man anything they liked.

The arguments were continuing over the future of Habergham High School and Governors agreed a two week delay before the vote for independence. That two weeks would give them time to study a report due to be published on the county’s education system.

One Burnley man decided to sell his television and video recorder. The only problem was, they were rented and therefore not his to sell. Feeling guilty he walked into the police station and gave himself up. He was given a conditional discharge but was forced to pay £30 costs and £374 compensation.

Finally, it was farewell to one of the town’s longest serving and most popular pub landlords, Irishman  Michael McGivern. Michael started at the White Horse in St. James Street. “What a den of iniquity it was,” he said. “Every rogue and prostitute in town frequented the place.” Glad to be out of there he moved to the very popular Park View across from Turf Moor before moving on to the Old Duke on Briercliffe Road in 1972. After almost twenty years there as mine host it was time to put the towels over for the last time.

As for the football, it was all good news. Three league wins and a cup success for Jimmy Mullen in his first four games and he added another win at Sincil Bank as we proved too strong for Lincoln in a 3-0 win.

The big surprise ahead of kick off was Graham Lancashire losing his place after scoring six goals in four league games. It was one of three changes from the league win over Walsall. Ian Measham returned at right back in place of Paul France, whilst John Francis and Mike Conroy returned to the starting line up at the expense of Lancashire and left back Ian Bray, a move that saw Joe Jakub go to left back where he’d played in the Autoglass Trophy win at Blackpool.

This was not a performance like the previous away league win at Wrexham. It was a more workmanlike effort from the Clarets although we were always the better side, a yard quicker and more skilful than our opponents.

We had a great opportunity to get on top in the game during the first half after Lincoln goalkeeper Matt Dickins got in a tangle with Francis and Roger Eli. He was forced off with an injury with John Schofield going in goal. Dickins was off the pitch for 22 minutes but the Clarets couldn’t capitalise against ten men and an outfield player in goal. Dickins returned on the half hour and we gave him a torrid time. Conroy headed against the post, the goalkeeper did well to save from Steve Harper, but on 39 minutes there was nothing he could do to stop Burnley taking the lead. A John Deary corner from the left got caught up in a group of players on the edge of the area. It fell for FRANCIS who looked up, picked his spot and fired the ball through the legs of a defender and into the net.

Burnley were very much the better side in the second half but it took the introduction of Lancashire to ensure the win. He came on for Eli and with quarter of an hour to go and got on the end of a ball from Jakub. He put Shane Nicholson under pressure and forced the home defender to handle the ball. Referee Roger Wiseman didn’t hesitate in pointing to the spot and CONROY stepped up to double the advantage.

Another eight minutes and the scoring was complete. Conroy hammered a long ball up the pitch which LANCASHIRE chased. He looked to have lost the race but stuck out a foot and the ball looped over Dickins and into the net off the underside of the bar. Jimmy Mullen raced out to join in the celebrations. His decision to use Lancashire from the bench had proved a good one and by the end of the game Lincoln were thankful for only a three goal defeat.

The points didn’t move us up the table. We remained in 7th place and now just a couple of points behind third, the last automatic promotion spot.

Elsewhere both Mansfield and Barnet scored four goals away from home to take them five points clear of third place Blackpool. Steve WIlkinson got two for Mansfield in their 4-1 win at Scunthorpe United whilst Roger Willis netted twice for league newcomers Barnet in their 4-0 victory at Scarborough.