Having become Football League Champions on that incredible night at Maine Road at the beginning of May, the Burnley team of sixty years ago set sail for America and the international club tournament in New York. The Burnley club were proud to be representing our country in this prestigious new tournament and for the occasion were kitted out in a new style claret and blue strip that had been presented to them by a Manchester firm, the most notable feature being the inclusion of the County Borough of Burnley’s Coat of Arms. 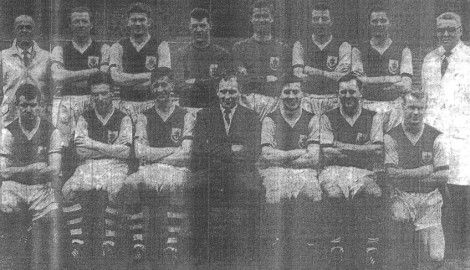 The club took 16 players to New York and twelve of them were present at Turf Moor for the official photograph two days before departure, as shown. Absentees were John Angus and Ray Pointer, both of whom had been given permission to travel home to the north-east and were preparing for the England Under-23 tour, and Alex Elder who had been home to Northern Ireland. Also missing was John Connelly as he continued to recover from his cartilage operation.

Angus, Pointer and Brian Miller were not with the players when they set sail. They were on their way to Berlin, Warsaw and Tel Aviv with the England Under-23 team and would return to London before flying to New York to join their Burnley colleagues.

Ahead of the journey Mr Harry Potts, the Burnley manager, announced the club’s retained list. Back then, a player retained was just that and was not free to go and find another club even at the end of his contract. Of the players at the club, just wing-half William Cockburn and inside-forward Ivor McAuley were released. Neither Cockburn nor McAuley had progressed beyond the reserve team. Mr Potts confirmed that all of the remaining 42 players had been retained.

Burnley Football Club had expressed their delight at being invited to this tournament but it is fair to say that things didn’t go as well as expected and the party returned home probably wishing they hadn’t gone and vowing not to return. There were issues with a sub-standard hotel while neither were we happy with the facilities, pitches or referees during the tournament along with accusations that Kilmarnock had kicked us off the park.

We beat Bayern Munich, Glenavon and Nice, drew against New York Americans but were beaten by Kilmarnock. We also played two games in Canada, losing against Montreal team Cantalia before moving on to Toronto and beating Scottish League champions Hearts. The whole tournament had been set up by New Yorker Bill Cox. He had previously owned baseball team Philadelphia Phillies but was banned from the sport for betting against his own team.

So, we returned home disappointed but still champions of England. Our next game would be against Wolves at home in the FA Charity Shield.