No fresh air and fun at the seaside 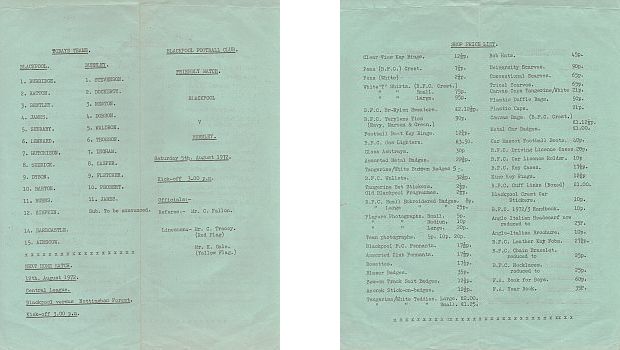 Having been knocked out of the Watney Cup by Bristol Rovers, Burnley moved quickly to ensure the team would not have a free Saturday just one week before the start of the 1972/73 season and arranged a friendly against Blackpool at Bloomfield Road.

We’d been confident of playing in the Watney Cup Final but the poor performance against Bristol Rovers had put paid to that and, instead of a home game to end the competition against Sheffield United, it was an extra day on the Fylde Coast, our first visit since that Easter day in April when the fans had turned on manager Jimmy Adamson. Despite going on to end the previous season with six consecutive wins, the relationship between manager and fans hadn’t improved much, if at all, and there wasn’t much to improve things in a game we lost 2-0. It was no better than the show we’d turned in against Bristol Rovers and again we went down by the same score.

He infuriated supporters by again leaving out Dave Thomas with the only change seeing the return of Geoff Nulty at left back for Keith Newton who had suffered a thigh injury in the Watney Cup defeat. Adamson confirmed that he intended giving all eleven players on the pitch the full ninety minutes, just about confirming that, Newton apart, his mind was made up for the opening day team.

Blackpool started much the better side and almost scored in the opening exchanges. We never really got going and we didn’t get a sight of goal until the half was almost at the midway point. Then, Leighton James, yet again our only shining light, hit a shot straight at home goalkeeper John Burridge. Our best effort of a dull first half came from Frank Casper. He went on a solo run and beat two defenders before curling a shot round a third. This time Burridge had more to do but was able to turn it round the post for a corner.

It was 0-0 at half time but Blackpool had been the better side. The teams came out for the second half. Blackpool made four substitutions and there was one for Burnley with Eric Probert again being forced off with an injury and replaced by Alan West.

If anything, Blackpool stepped things up after the break and were, by then, looking much the better side. And then we all but took the lead. Martin Dobson set up Billy Ingham but the midfielder fired over the bar. We paid for that miss too. From the restart, the ball was played out to Blackpool winger Tommy Hutchison, a player who eleven years later would join Burnley. He won a corner on the left which he took himself, finding Keith DYSON who got in a good header at the near post. Dyson had scored three against us in that humiliating first half just months earlier and the former Newcastle striker, who some years later became a work colleague of mine, had now scored a fourth goal against us. Thankfully, as I often reminded him, he was never again a goalscorer against Burnley.

A quarter of an hour later and the game was up for us. We conceded a free kick on their left flank. Full back Bill Bentley fired it in, Stevenson could only parry it and Alan AINSCOW blasted the loose ball home. There was simply no response from Burnley at all. We had been beaten by a much better side and there was little enthusiasm from the supporters just a week away from the start of the new season.

“It’s next Saturday that really counts,” Adamson said. “We were a bit lethargic. Now we’ve got a week to sharpen up both mentally and physically before the serious business begins. I wasn’t particularly disappointed by this performance but I would be if we played like this next week.”

Yet again, he was questioned about Thomas. The fans called for his introduction once more but the only change was that of West for Probert. It appeared the rift between player and manager was worsening, if indeed that was possible. “Alan West is a recognised midfield player and when Eric was injured he was the obvious replacement,” blasted Adamson. “Thomas’s best position for Burnley is as a forward, not a midfielder,” he argued. “As manager I pick what I think is my strongest side.”

Adamson also confirmed that Probert had suffered a kick above the right ankle that could see him ruled out of the opening league game against Carlisle. Adamson explained: “It’s too early to say yet whether Eric will have recovered sufficiently to play, but at the moment he must be considered doubtful.”

That was it, the pre-season was over. There was just the club’s AGM to be held before the big kick off. There was precious little confidence that this could be a good season. But, as Adamson said, it was all about the following week and not a pre-season game at Blackpool.