Scarborough finally beaten in the Autoglass

At the third time of asking we got our Autoglass Trophy tie against Scarborough played in 1992 and won through to the next round with a 3-1 victory at Turf Moor to take us one step closer to Wembley. 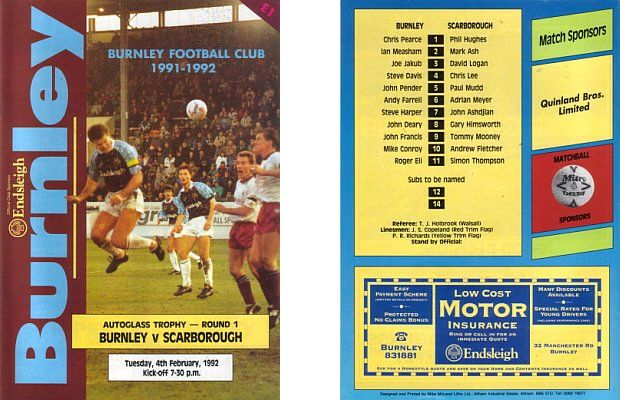 The Burnley Express that day reported the sad death of Mr Laurie Cox. He was believed to have done more for hospice care in the town than anyone else and had now lost his own two year fight against cancer. Muriel Jobling, the hospice fund chairman, was devastated at the loss and said: “We will always remember him as will the many people who owe him a deep sense of gratitude.”

Meanwhile, the fight to save Gorse Hill OAP home continued. A petition had now gathered 5,000 signatures against the closure whilst a personal letter had been sent to Queen Elizabeth the Queen Mother asking for her support. She did reply, although didn’t commit to standing with a clip board getting signatures in Burnley town centre. Instead the nonagenarian confirmed that one of her officials would write to the local health authority regarding the potential closure.

The court case following the ‘Battle of Holbeck Street’ finally got underway. An Asian youth, giving evidence against a 36-year-old white man, told the court that he and his two friends were shot as racial tension exploded into violence. It had all started over an argument about music being played too loudly and it all came to a head on a night when one couple were holding a noisy party that spilled out onto the street just after midnight. The charges against the 36-year-old, of which there were seven, included three of attempted murder.

The Asian man told the court: “They started shouting racial abuse. When you know there is going to be a punch up you call for back up, don’t you?” He confirmed that they were up against people armed with baseball bats and bull terriers whilst the man charged had pointed a sawn off shotgun at them and deliberately fired. The case was still proceeding.

One man was very fussy what sort of cars he drove. He was a 23-year-old man already disqualified from driving, but in the space of a week he stole four cars, all of which were Vauxhalls. Having asked for a series of other offences to be taken into account, he was sentenced to three months in prison.

There was trouble at the central library too, I kid you not, and the trouble was being caused by a Mr Paul Dew who owned the Aenon chapel building next to the library. He hadn’t done anything sinister such as making too much noise in the reference and community area but he’d got upset when the council told him to take down a big sign from outside his building which he had converted into a shopping area, this because the building was listed. He then learned the library intended building a ramp at the front which he thought inappropriate so he applied to have the library building listed which meant planners had to go back to the drawing board when the Department of the Environment slapped a listed building notice on the library. “What was planned was an abortion,” said Dew. “I have been told that I can’t do things to my building but what is planned for the library was even worse, a disgrace.”

Last week we reported Mr Jimmy Mullen’s conviction for a driving offence and one Burnley resident, Mr Dan Lord of Hall Park Avenue, was not happy with Burnley Football Club’s involvement. In a letter to the Burnley Express, the 60-year-old wrote: “I cannot understand why Burnley Football Club should have got involved with their manager’s court case. Mr Mullen was driving under the influence of alcohol. He was involved in an accident but, thank God, no one was hurt. Lots of people are under stress but that does not give them the right to drive in an unfit state through alcohol. Perhaps Mr Teasdale might tell people who have lost dear ones due to people under the influence of alcohol. No, we should not make excuses for these people, but ban them and our roads will be that much safer.”

Jimmy wasn’t in everyone’s bad books and the club’s marketing manager Cynthia Haworth, who had replaced Joyce Pickles, decided to make her mark at the club by commemorating one of football’s finest hours. By that she meant the performance of the Burnley fans in the FA Cup defeat at Derby, and my word did she commemorate it – with cheap tacky looking t-shirts. “It was one of the finest hours in the history of football,” she said as they went on sale at the club shop with the manager embarrassingly being forced to wear one. Ms Haworth didn’t last too long at Burnley Football Club – I wonder why.

The manager, meanwhile, saw his team get through in the Autoglass as the game was finally played to a conclusion. Two weeks earlier it had been abandoned after 90 minutes with the score at 0-0 and was then postponed a week later. This time there was no mistake as three second half goals ensured a comfortable win for a Burnley team that saw Steve Harper come back in for the cup-tied Adrian Randall.

We dominated the first half but without being able to turn our domination into goals. That changed after the break when we took the lead just ten minutes into the second half. It came when John Francis saw his on target header blocked. Andy Farrell then saw his effort blocked but the ball came out to Mike CONROY who headed us into the lead. Seven minutes later it was 2-0 with a wonderful solo goal from John DEARY. He turned in yet another man of the match performance and capped it with this goal. He went on a superb run, shrugging off three defenders, before driving home from just inside the penalty box.

Farrell almost made it three immediately afterwards but his long range screamer rattled the bar. It was all Burnley now but in a rare break Scarborough did pull one back when Mark JULES lashed in a shot off the post. We weren’t to be denied though. After a great run from Conroy, he played the ball for Roger ELI who made no mistake to give us the 3-1 win and a place in the next round which would be against Rotherham at Millmoor two weeks later.

Mullen said after the game: “We won at a canter while playing well within ourselves and that can’t be a bad sign. We needed to win well tonight and 3-1 is emphatic. As soon as we scored our first I knew we had won the game. We weren’t in any trouble after that.”

Mullen also confirmed that Luton goalkeeper Andrew Petterson had been training with us but had now returned to his parent club. “It’s difficult to assess a player when you have only seen him in training,” but he confirmed that we might consider a loan.