Second leg win against Lincoln takes Burnley through in cup

We might have still been looking for our first goal and first win of the league season in 1997, but a 2-1 home win against Lincoln saw us go through to the second round of the League Cup.

In the last report, we brought the awful news of Chantelle Ryan, aged 14 months, who had suffered horrific burns in a fire at her home in Abel Street. She was still in Booth Hall Children’s Hospital in Manchester with staff describing her as poorly but stable. 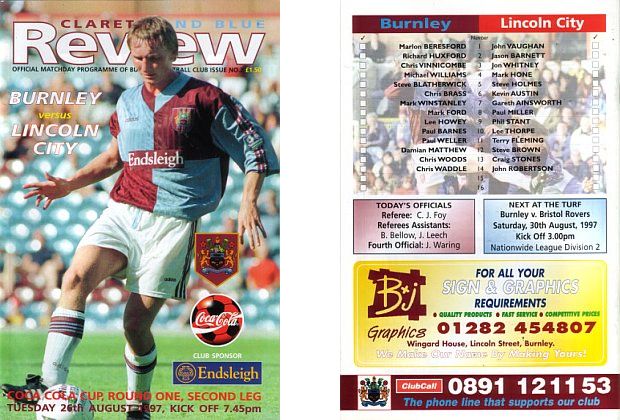 A young schoolboy was another to have suffered an accident. Twelve-year-old Ashley Holden found himself impaled on metal railings outside St Mary Magdalene’s School and was told by doctors that he was just inches from death. “They said if it had been a couple of inches higher I would have been dead,” Ashley said. The spike had stuck into the inside of his right thigh, just inches from his femoral artery.

UK Waste, the company contracted to empty the bins in Burnley, were in conflict with the local council regarding Bank Holiday Monday problems. They said that staffing problems meant they would only be able to provide a forty per cent service but were told in no uncertain terms that the contract must be honoured. Councillor Mrs Kath Reade said: “The council expects UK Waste to honour the terms of the contract it has with the people of Burnley. If that means drafting people in from other parts of their organisation to deal with it, that’s what they should do.”

How things have changed. Back in 1997, it was big news when Mr David Jepson announced that he was retiring after 42 years working for Woolworth’s, the last seven of them as manager of the Burnley store. He started in the stockroom but progressed all the way to the top job. There was no suggestion of a retirement gift but surely he must have gone with at least a big bag of pick and mix.

There was some relief for Burnley couple Mr & Mrs Peat when they received news that escaped prisoner Darren Jackson, who was serving life for the murder of their daughter Gillian Ellis in 1984, had been recaptured. Jackson had escaped from a prison in Nottingham but after a few days on the run had led to Nelson, he phoned Colne police station to give himself up. He was transferred to Preston Prison having been questioned by police in Colne.

Hopes of an early start to the new super highway from Colne into Yorkshire, in effect an extension of the M65, looked set for a delay until 2001. It looked as though motorists heading beyond Colne were about to have a few more years coping with the traffic jams on North Valley Road in Colne.

It was a home game for the Clarets in the League Cup against Lincoln with the two teams going into the game having drawn the first leg 1-1 at Sincil Bank and we finally got a hint of what was to come with an excellent performance in a 2-1 win with all three goals coming early in the game.

“The Waddle revolution took a huge step in the right direction,” wrote Edward Lee in the Burnley Express on a night when the manager himself turned in an outstanding performance in a new role as a sweeper. He made some good runs, dribbling past Lincoln players, and made a series of superb forward passes.

John Beck’s team really had no answer at times. They played with no culture whatsoever and Burnley would have recorded a massive win but for their goalkeeper John Vaughan who had the game of his life which included a penalty save to deny Paul Barnes.

It took us all of 37 seconds to go in front. David Eyres chipped a ball forward for Mark Winstanley who got down the left to cross the ball. It was deep but collected by Paul Weller who pulled it back into the danger area. Barnes couldn’t find the net but his shot ran to Andy COOKE who squeezed home a shot from just inside the penalty box.

It was Vaughan who denied us on at least three more occasions before we doubled our lead just sixteen minutes in from the penalty spot. Weller tried to burst into the box but as he got the ball inside, Dean Chandler handled it and referee Chris Foy had no hesitation in pointing at the spot. Up stepped EYRES and he hammered the penalty home off the post.

Damian Matthew, in good form, was so close to making it three but then, out of the blue, Lincoln pulled one back when Gareth AINSWORTH headed home from a free kick. Barnes then missed two good chances, the second of them from the penalty and despite Marlon Beresford having to make a good save right on half time, the game should have been won by then.

It really was all Burnley in the second half and things went worse for Lincoln when striker Lee Thorpe was yellow carded for a shocking foul on Waddle. Man of the match Steve Blatherwick took exception to it and got involved along with a number of other players. Blatherwick received a yellow card; Thorpe got a second yellow and was sent off.

It all ended 2-1 but this was the sort of performance we’d been waiting for and we really could have won this by a sack full. Even so, we were through to the next round.

All the League Cup results are below with the aggregate scores shown in brackets. Seven former or future Clarets scored in this round; they were Mike Conroy (Fulham), John Gayle (Northampton), Steve Guinan (Nottingham Forest), Micah Hyde (Watford), David Johnson (Bury), Warren Joyce (Hull) and David Reeves (Preston). Besides Guinan, Craig Armstrong was also on the mark in the Forest v Doncaster game but scored Donny’s only goal in the two legs with an own goal. It didn’t matter, Forest won 10-1 on aggregate.