The top twenty with Ben Mee

Goalkeeper Jerry Dawson made his Burnley league debut in a 3-0 home win against Stockport County on 13th April 1907 with his 522nd and final game coming against Liverpool, also at Turf Moor on Christmas Day 1925, a game we won 3-2 courtesy of two goals from George Beel and one from Louis Page.

To make 522 appearances in the league is some achievement and that total would have been even higher but for the seasons lost during World War I. It’s a total that leaves him with the record appearance number in league football for Burnley and by some considerable distance. 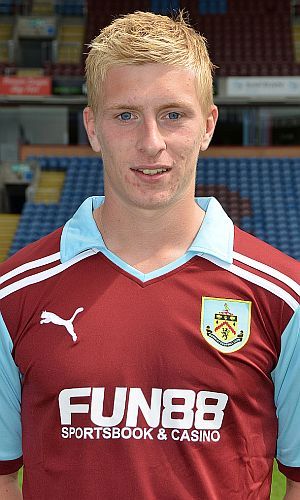 Dawson is the only player to reach 500 and only a further seven have made it to 400 but this week the number of players who have recorded 300 league appearances for Burnley went up by one to twenty-one with the addition of current captain Ben Mee. What a night to get there too, not only captaining our depleted side to a 1-0 win at Crystal Palace but also popping up with the only goal of the game, his first since early January 2017.

Let’s go back almost nine years, to mid-July 2011 when the 21-year-old Mee joined us on a season long loan from Manchester City. Manager Eddie Howe had wanted Barnsley defender Jason Shackell but had missed out when he moved to Derby County. A Burnley director had a good contact at Manchester City and that helped us get Mee from under the noses of Leicester where he’d been on loan in the previous season and where manager Sven Goran Eriksson was keen to see him return.

He went straight into the team for the opening game of the season, that debut coming at home against a Watford team managed by Sean Dyche who himself was taking charge of a team in the Football League for the first time.

He’s one of just two from that team to be playing Premier League football today, the other being his current team mate Jay Rodriguez while Kieran Trippier, who also joined on loan from Manchester City a couple of weeks later is now playing in La Liga.

Season long loans can be interrupted in the January transfer windows; clubs can ask for a recall, but with Mee, and Trippier for that matter, it was just the opposite. By the time that mid-season window had closed both had committed to Burnley on a permanent basis. At the time he said he’d been enjoying life at Burnley although he had been left out on one occasion and once back was being moved between the centre of defence and left back where he was challenging Brian Easton.

I think one incident that season is one that will always stand out with Burnley supporters and left many of us challenging his sanity when he got his head down, and I mean down, to get in a block to prevent Reading from scoring against us at the Madejski Stadium.

Over the next period he saw off such as Easton and Danny Lafferty and settled into the left back role on a permanent basis. That’s where he was playing when the goals against column was flying up at a ridiculous rate at the beginning of 2012/13 and he was still there at the end of the following season when the same back four were in formidable form in a magnificent promotion season under new manager Dyche.

By August 2014 he was lining up for his Premier League debut against Chelsea. A few games into the season he lost his place to new signing Stephen Ward but quickly returned when Ward suffered a long term injury. He kept his place for the remainder of that season and right up to Boxing Day of the following season with us back in the Championship.

On a day of floods we suffered a 3-0 defeat at Hull in that Boxing Day game. It signalled the end of Michael Duff’s playing career, apart from a cameo at the end of the season, with Ward coming in and Mee returning to the centre of defence. He’s not played at left back since and, in four and a half years he’s not once lost his place in the team other than missing games at the end of both the 2016/17 and 2017/18 seasons through injury.

Alongside Michael Keane and then James Tarkowski, he’s been a key player in our four consecutive seasons in the Premier League and it is not without coincidence that both Keane and Tarkowski won England caps on the back of performances alongside Mee for Burnley.

He captained us for much of the 2017/18 season with Tom Heaton out injured and continues in the role during the first half of last season. When Heaton moved to Aston Villa last summer, he became club captain. They were massive shoes to fill; Tom was a brilliant club captain but Ben is proving to be every bit the part and that really has shown recently. He’s led the players with the Premier League captains as they set up the fundraising, he’s fronted on everything in terms of Project Restart and all this while his prematurely born daughter Olive Grace, who we are delighted to hear is doing well, is in hospital.

His 100th appearance came at Spurs in December 2014 while the 200 was reached at Everton in April 2017 with him now reaching the elite group three days ago at Crystal Palace. Aged 30, that total could climb considerably should he remain with the club and injury free. With nine years gone, and a contract potentially running for a further two years, the captain will hopefully be pushing towards 400 league appearances by then and there is every chance with the current manager. A total of 260 of those appearances have come under Dyche’s management. That’s 72 more than Heaton who is second highest since Dyche arrived.

So our current captain becomes the first Burnley player to join the 300 club since Michael Duff, and the pair join Steve Davis as the only players to reach the total during this century. The 300 club is made up of six pre-war players and fifteen since World War II which includes seven from the title winning team of 1959/60.