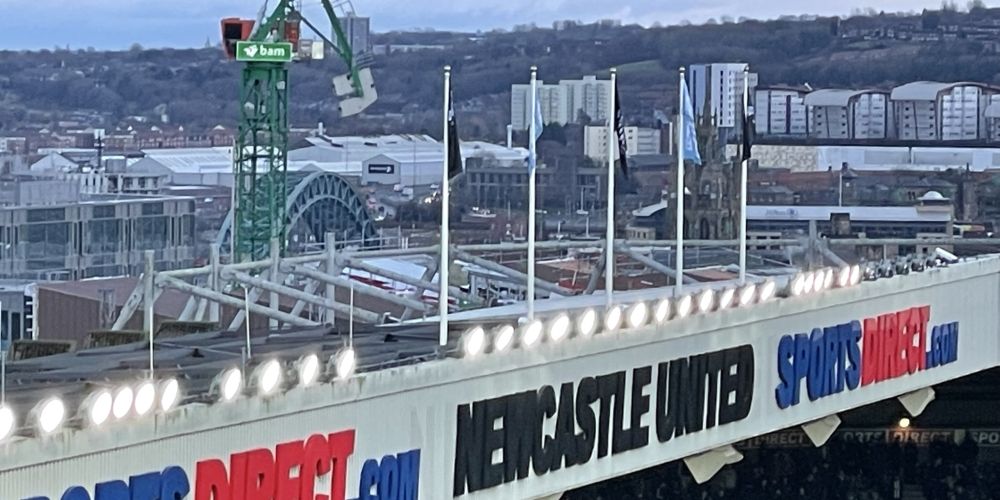 Some team, somewhere were going to be the victims when Newcastle United finally won a game this season and, sadly, that was us with yesterday’s 1-0 defeat against them at St. James’ Park.

The result hinged on one goal five minutes before half time from Callum Wilson that turned the game on its head and led to the first three point result for the Geordies since they ended last season with wins against relegated pair Sheffield United and Fulham.

If away trips were defined by the ninety minutes of football, this one, ultimately, would have been another very disappointing day but yet again, despite the game, we had another excellent day out to Newcastle other than the oldest member of our party having a struggle to reach his seat.

I’ve been to away games this season by bus, train and car for this one it was a combination of all three. The bus journey was a short one to the railway station, a train to Halifax where the driver our driver for the day was waiting.

Embed from Getty Images
The journey was a relatively smooth one, reaching our usual parking spot close to the river just past noon giving us a short walk to our favoured hostelry close to the Tyne Bridge, just about as close as you can get. We probably stayed there longer than planned and that’s what led to my problems.

I managed the walk up the hill to St. James’ Park and we went our separate ways with me making my way to the lift only to find that the queues were so long there was a good chance I would miss kick off. There was no option; it was the mountaineering up the stairs. I made it, just about, and with some assistance from an ex-Claret but never again will I be so late arriving at Newcastle.

As an aside, having already gone through the gate for the lift, I didn’t have my ticket scanned and so the attendance below doesn’t include me although I was very definitely there to see a Burnley team, with two changes, take to the pitch. Those changes saw the returns of James Tarkowski and Ashley Westwood but Nathan Collins remained in the side after his good performance at Wolves with skipper Ben Mee ruled out with an injury.

Since the 3-3 draw there on New Year’s Day, this fixture isn’t one that has brought much in the way of excitement and that didn’t really improve in this one although for much of the first half we were by far the better side.

Embed from Getty Images
Without ever looking as if we were in top gear, we just about silenced the home crowd. Maxwel Cornet had a couple of efforts at goal, a shot that went wide and a header saved by Martin Dúbravka. Between those efforts, Jóhann Berg Guðmundsson’s goal bound shot from the left was deflected onto the post.

All we’d seen from the home side was one chance that was denied by a superb challenge from Charlie Taylor. I felt it just needed a goal for us at that point and I really do think we’d have gone on to win the game convincingly, but it didn’t come and then things started to go wrong, beginning with an injury to Cornet that forced him off just past the half hour with Matěj Vydra replacing him.

And then disaster struck. Nick Pope, came for a Joe Willock cross, grabbed it and then lost possession of the ball as he landed. Wilson did well, got the ball, took it to the right and hit a rising shot into the net that Chris Wood on the line could do nothing about.

Pope complained he’d been fouled and we had quite a wait before referee Paul Tierney was advised by Lee Mason to award the goal. I’ve seen it back; Pope does get a push in the back from Jamaal Lascelles but the decision to award the goal was very much a correct one.

Embed from Getty Images
Could we respond? Well, the big chance came in stoppage time. A Tarkowski crossfield pass found Matt Lowton on the right and his ball in found Vydra clear. He controlled it well but then made a real mess of the shot, according to the Sky commentator. We should have been level; we weren’t and Newcastle took a 1-0 lead into the break in a now loud, and buoyant stadium.

I could virtually end the report here and confirm the 1-0 defeat, simply because we offered precious little in the second half. We had lots of the ball but rarely threatened the Newcastle goal with concerns that the game would be all but over if they got a second.

Sean Dyche made a couple of substitutions, bringing on Connor Roberts for his Burnley league debut and then Jay Rodriguez; both were involved when, for a few seconds, we thought we’d snatched a point.

Roberts got to the ball on the right and played it inside for Vydra, and then Wood to Westwood who slipped in for Rodriguez to score with a left footed shot. As the Burnley fans went up to celebrate, so did the assistant referee’s flag for offside.

Embed from Getty Images
From behind the goal up in the Gods at the Leazes it’s impossible to have a clue but television evidence shows the decision was absolutely the correct one and you have to wonder just how on earth it took them almost a minute at Stockley Park to confirm it.

That was it; that was our last chance and the scenes at the final whistle were reminiscent of Swansea a few years ago as Eddie Howe, Jason Tindall and Simon Weatherstone led a lap of honour that suggested they thought the job of staying up was done.

For us, it was just the descent out of the stand, which I have to say is nothing like as bad on the lungs as the ascent was.

Reflecting on it, we can now see that last Wednesday’s point at Wolves has kept us off the bottom of the league and the longer this run of disappointing results continues, the more anxious we have to be of retaining our Premier League place.

Embed from Getty Images
Danny Murphy on Match of the Day, often a supporter of us to be fair, said he’s worried about us and points to the lack of goals. That surprised me given that only once in the last six seasons have we actually had more goals after fourteen games than we have now and that was two seasons ago.

Next week’s is a tough one against a very much in form West Ham but we can’t wait too much longer to get some more much needed wins.