Burnley fell to only a third defeat of the season when Sheffield Wednesday won 1-0 at Turf Moor on this day in 1973, and it was a defeat that, alongside results elsewhere, saw us lose first place in the Second Division for the first time since September. 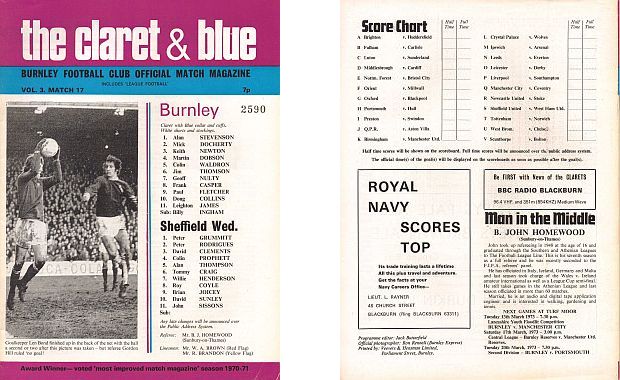 There was white smoke coming out by the side of the Bob Lord Stand recently but there was no news of the election of a new Pope although back in 1973 the Catholic church were creating a bit of history in Burnley when Father Francis Deaney, the Rural Dean of St. Mary’s RC Church in Yorkshire Street, gave the sermon at the town’s Parish Church of St. Peter. It was the first ever united service to be held in the town and there were also representatives from the United Reform Church, Mount Pleasant, Sion Baptist, Central Methodist, The Society of Friends and St. Matthew’s Church as well as those from St. Peter’s and St. Mary’s, in the congregation. It was intended to have this as a regular event on the calendar. Whether it is or not I don’t know but at the time, in 1973, it was confirmed as a huge success by all those involved.

The protest against the M65 by the residents of Rosegrove and Gannow started with a band and ended in anger and bitterness. After police approved the route, the march to the town hall was led by the Rosegrove Boys’ Brigade Band. Sadly, it all ended badly after a clash between Councillor Mike Noble and former mayor and protest group chairman Mr Ronald Bushby, this after 60 residents had taken part in the protest march from the central library, through the town centre to the town hall. Noble upset them when, speaking about Bushby, he said: “I wonder if he is concerned at only the well being of that area, and not at the well being of the town as a whole. I went to their first meeting and offered my services, having stated that I believed in the road and the line it took. I offered to assist anyone I could in obtaining information, and to make sure that every assistance was given by way of compensation. The chairman (Mr Bushby) said that my services were not required, and there will be people sitting in the gallery who heard those remarks. I, nevertheless, asked to be kept in touch, but I have not heard a word since.”

Bushby was furious. In reply he said: “I am upset about some of the remarks made, but certainly we are prepared to hold a public debate on the matter with the councillors. Councillor Noble said that he had offered his services to us, but this was only for obtaining compensation. We are not wanting compensation; we want to keep our homes. There had been much talk about vandalism lately, but the councillors are the biggest vandals of all. They are intent on destroying not only a few homes but the whole of Rosegrove, Gannow and Whittlefield.”

That one was due to run and run, but for one group in town it was the end of the road. After forty years of talks, discussion and outings, the Burnley and District Mining Society held its last meeting. The society, which was made up mainly of miners and ex-miners, rose and fell with the coal industry in the town and at the last meeting they could only muster eight members. “About 15 years ago, when there was a good deal of mining locally, our membership flourished, and there were even several high ranking coal board officials among our honorary members. Since then we have declined, and it was decided to wind up the society,” said a very disappointed secretary and treasurer Mr Walter Nutter.

Trouble was brewing between newsagents and the town’s Education Committee after they accused said newsagents of exploiting youngsters who delivered newspapers. Newsagent Councillor Ernest Bacon told the council meeting that they had taken umbrage at the suggestion. He brought laughter to the council chamber when he said: “Charges that they are being exploited are as remote as Ted Heath conducting a Russian orchestra to the tune of the Red Flag or Harold WIlson smoking a Churchillian cigar on his yacht at Cowes.” He added: “If a newspaper were not delivered the barrier between a man and his wife at the breakfast table would be down. At least his barrier does save divorces.”

“Is that your own experience,” asked the mayor. “Yes,” said Bacon. Councillor Mrs Ada Smith stepped in and said she was completely behind Councillor Bacon, bringing further roars of laughter.

Whilst on the subject of newsagents, complaints of pornographic literature being sold forced police to seize more than 500 ‘girlie magazines’ in a surprise raid on six Burnley newsagents with details to be sent to the Director of Public Prosecutions. This had all come about because one woman, a Mrs Mavis Thornton, had made a complaint. The mother of six who must have been shocked at what she saw said she was delighted at the police action. Councillor Ada Smith might well have been right behind Councillor Bacon but she was not happy when she took a look at these magazines. “One of them made me sick,” she admitted. “It was a passage giving answers rather like a letters page in an ordinary women’s magazine.”

Sunday shopping was on its way to Burnley with the opening of Contimans supermarket in Bull Street. They had got round the trading laws by not opening on a Saturday but stressed they did not sell foodstuffs but did sell a vast range of family and household goods.

The Studio cinema in Burnley was ready to re-open with three studios. They’d really pushed the boat out too with the main attraction being the 1956 film – Cecil B. DeMille’s ‘The Ten Commandments’.

Before the home game against Sheffield Wednesday, Burnley revealed that virtually all of the seats on the LeagueLiner to Cardiff had been sold with just about ten remaining in the dining section at £7.25. All of the standard tickets, at £3.75, had been sold within an hour of them going on sale and so the club quickly reduced the number of dining seats to get more standard passengers on board, leaving just 100 dining seats available.

Burnley were confident of doing the double over the Steel City side having won 1-0 at Hillsborough with a Leighton James goal, but things didn’t quite go to plan. We were beaten for only the third time in the season by a Sheffield Wednesday team who came looking for a slice of glory and weren’t too particular how they got it. In his match programme notes, Jimmy Adamson wrote: “As QPR and ourselves are both finding, when you are looking all ready for elevation to First Division status, opponents play in the knowledge that a point taken is a slice of glory for that particular day at least and they set their stall out accordingly.”

Right from the outset they made their plan clear. They were very quick and robust in the tackle and refused the Clarets any time at all to settle. They packed the midfield and gave us little room to build up attacks, but at the same time their forwards made very little impression on the Burnley defence.

They won because their spoiling tactics paid off. With both defences in commanding form neither goalkeeper saw much action and it turned out to be anything but a spectacle for the biggest league attendance of the season on a day when even the sun came out.

Referee John Homewood didn’t help. He failed to keep a tight control on affairs. He might have been quick to blow for offences but not once did he speak to a player let alone caution anyone. Doug Collins was badly felled by a crude challenge for which nothing was given and right on half time Colin Waldron collapsed off the ball when alongside David Sunley. It seemed Homewood had seen it and pointed Sunley, rightly so, to the dressing room and then blew for half time.

Everyone assumed Sunley had been sent off but, astonishingly, he returned for the second half and it was he who did the damage. With just 16 minutes remaining, immediately after Jim Thomson had missed a good chance, Wednesday swept forward through Johnny Sissons. He fired over a long cross and SUNLEY rose unchallenged to score with a looping header over Alan Stevenson into the corner of the net.

Burnley had nothing to come back with and so Sheffield Wednesday followed Orient and QPR in recording wins against us in the season.

QPR were only able to draw in midweek. That was the good news but their win on the Saturday against Aston Villa saw them go above us. The Saturday back in September when we’d drawn 2-2 at Luton was the previous occasion we hadn’t been top but we still held an eight point lead over third. That was now Fulham and Blackpool. Fulham had beaten Carlisle and Blackpool had picked up two 1-0 wins in the week at home to Cardiff and at Oxford.

It was Cardiff next at Ninian Park and a win against the strugglers would automatically get us back on top with QPR having no game. Their fixture against Sunderland at Roker Park had been called off because of Sunderland’s FA Cup 6th round tie against Luton.

« Wood back and on top form
Referee confirmed for Everton game »