Agyei on the move

While we await, hopefully, some positive transfer news in this window, one former Burnley striker has swapped Oxford United for Crewe Alexandra in League One.

Agyei has left Oxford after two and a half years. He moved there having rejected a new contract offer at Burnley with the hope of getting regular first team football, but it’s not quite worked out that way. He’s made 66 league appearances for Oxford although only twelve of those have been starts. He scored eight League One goals for them with six of those scored having come on as a substitute. 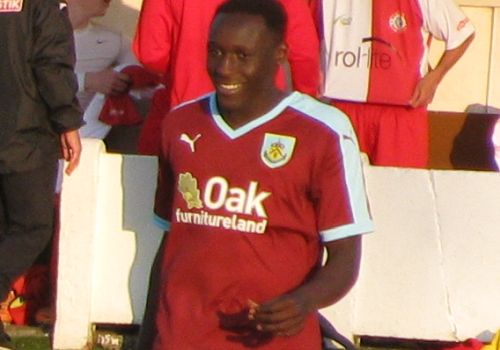 Oxford boss Karl Robinson said: “It’s been a pleasure to work with Dan but he needs game time and we hope things work out well for him with a new start. We certainly wish him well and thank him for his efforts here.”

Now aged 24, he has signed an 18-month contract at Crewe where he joins another former Burnley striker Chris Long. He isn’t in the squad today having not signed in time for their home game against promotion chasing Rotherham.

It was back in July 2015 that Agyei arrived at Burnley from Wimbledon. He made his first appearance for us as a trialist at Ashton United (see picture), scoring the first goal in a 2-1 win. He scored two more goals in another friendly at Sheffield and on 29th July completed his move to Turf Moor.

A prolific scorer at under-23 level, he enjoyed loans at Coventry, Walsall and Blackpool and played in our first team, making three Premier League substitute appearances against Liverpool, Everton and Manchester United, coming on for Scott Arfield at Anfield and then replacing Ashley Barnes in the other two games.

He spent the entire 2018/19 season at Burnley and scored 24 league and cup goals for the under-23s, then playing in the Professional Development League. At the end of that season, he opted to make the move to Oxford.