With the war at an end, Burnley, who had been without a manager since the departure of Alf Boland in 1940, moved to appoint former England half back Cliff Britton in what was his first managerial role.

A Bristolian, Britton had played for his home club Bristol Rovers before signing for Everton in 1932 where he went on to make over 220 league appearances. During his time at Everton he also won nine full England caps between 1935 and 1937 and later he played in a further number of war time internationals. His playing career came to an end during those war time years and Burnley offered him a route into management that would see him take charge of four clubs over the next twenty years. 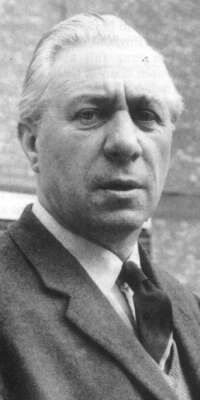 Burnley had a wait for him to start his first managerial post. It was five months after his appointment before he was able to leave the armed forces to take over and during his first season, as the club continued to play in a Football League North competition, there was no sign of any revival for Burnley’s fortunes. We also played in the FA Cup that season, losing a two legged tie against Stoke in April 1946.

By then, in February of 1946, Britton had astonished shareholders at the club’s Annual General Meeting by announcing a three year plan to get the club back into the First Division and he certainly didn’t fail. The return of league football for the 1946/47 season, with the same fixture list that had been scheduled some seven years earlier, saw some of the players who had been with the club in the 1930s, joined by some astute signings, such as Alan Brown, who joined from Huddersfield ahead of the season, and then Reg Attwell who was signed from West Ham in November, a player who had featured in some games for us as a guest during the previous season.

Britton’s plan succeeded in year one with a side noted for keeping clean sheets and our ‘Iron Curtain defence’ often referred to. In one of the worst winters, weather wise, in memory, Burnley went from strength to strength. They reached the FA Cup Final and in a season that went on until June won promotion two years ahead of Britton’s promise.

He was very much a progressive manager with new style training and he revealed that Burnley would not make big signings, Instead, they would produce their own footballers, taking on youngsters and grooming them for the first team. Two of his signings in this respect were Jimmy Adamson and Tommy Cummings.

Burnley’s return to the First Division under Britton proved to be an excellent one and in the first season back ended with a third place finish. Arsenal were Champions and we were only robbed of second place on goal average by Manchester United.

The club was going from strength to strength but was to suffer a major blow early in the following 1948/49 season. In September, with just a few games played, Britton left after being offered the manager’s job at his old club Everton. He said at the time: “I have been exceptionally happy with Burnley and shall be sorry to leave them,” but added: “You cannot lose your love for Everton, no matter how long you are away.”

He was with the Goodison Park club for six and a half years and that was followed by a five year stint at Preston and eight years with Hull before his management career came to an end in November 1969. He remained with the Yorkshire club for another two years as General Manager before retiring and he passed away in 1975 in Hull at the age of 66.

Cliff Britton should be well remembered at Turf Moor. An astute technician, he brought new coaching methods with him, took hold of the club after the trials of war and in two years Burnley enjoyed its second FA Cup final, a promotion and then establishing itself as a top division club again.