Collins is a Claret

Burnley have been shopping at Stoke again and have today signed their 20-year-old defender Nathan Collins as Sean Dyche lands his first summer signing. Collins, who can play at right-back or in the centre of defence, has signed a four year deal plus a one year option with the Clarets and becomes the sixth player Dyche has brought to Turf Moor from the bet365 Stadium, following on from Michael Kightly, Jonathan Walters, Phil Bardsley, Peter Crouch and Erik Pieters. 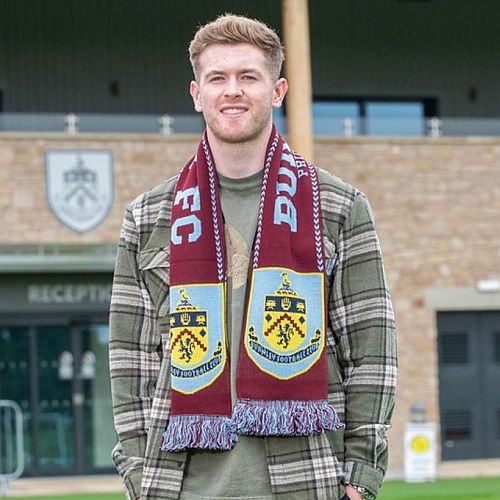 Unlike the previous five who, all but Kightly, were over 30, Collins is a young player who made his Stoke debut just over two years ago, coming on as a substitute for Benik Afobe in a 3-1 defeat at Swansea in April 2019. Ten days later, he lined up alongside former Claret Sam Vokes for his first start at Middlesbrough.

That game at Middlesbrough ended in a 1-0 defeat but last season he scored the only goal against them in a 1-0 home win. It was just his second goal in 39 league appearances although that figure would have been higher but for a season ending injury that has seen him out of the reckoning since mid-February.

By then, we had already reportedly had offers turned down during the last window for the Irishman from Leixlip in County Kildare who has come through the academy at Stoke having been spotted playing for Cherry Orchard in his native Ireland. He was just 15 at the time and was soon in the youth team who were coached by former Claret Kevin Russell. He broke into the first team at 17, captained the side at the young age of 18 and became a regular at 19. During that time there has been interest from several clubs including Arsenal, Chelsea, Leicester and Manchester United as well as Bundlesliga club Werder Bremen.

He’s also represented his country up to under-21 level and is tipped to become a full international in the near future.

Collins comes from a football family. His dad Dave started out at Liverpool without making the first team but played for both Wigan and Oxford before returning to his native Ireland to play for both Shelbourne and Athlone.

HIs older brother Josh has played in the League of Ireland but perhaps the best known of the family is his uncle Eamonn Collins who created history in English football when Alan Ball gave him a first team debut at Blackpool in an Anglo- Scottish Cup tie aged just 14. He went on to play for Southampton and Portsmouth before having his most productive spell with Colchester.

Speaking to the club’s website, Collins said: ““I want to play in the Premier League. It’s going to be a jump but I think I can be ready for it. Every season they go into it, Burnley look dangerous. They can always hurt teams and it’s a really attractive team to come and play for.

“I want a challenge. That’s why I play football, to challenge myself and I can’t wait to get going. I want to play big games, I want to play against these players, I really can’t wait. Looking at Burnley, looking at what they’ve done in the last few seasons and what they want for the future; everything played a part. I think they do have big expectations at this club and I want to be part of it.”

Nathan Collins is now a Burnley player and we welcome him to Turf Moor.