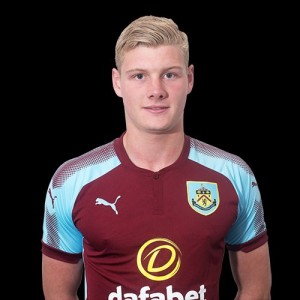 Back in February 2017, we signed young central defender Harry Flowers from Staffordshire club Brocton Town for our under-23s.

The signing got a lot of publicity with him being the grandson of former Wolves and England international Ron Flowers and he settled into the under-23s at Burnley and along with goalkeeper Aidan Stone, who arrived from the same club, they were part of the team that went to Brocton to play in a pre-season friendly in 2018.

An injury early in the 2018/19 season led to his departure from Burnley and he moved into the National League with Guiseley in January 2018. Later that year he signed for Solihull Moors although he spent much of last season in the Irish League with Larne.

Yesterday he made the move to Brackley Town for the new season, a club who were third in National League North when the season was ended in March, a position they’d held in each of the two previous seasons.

Flowers will now be hoping he can help them take the step up into the National League next season.