John Talbut, who played 160 games for Burnley between 1958 and 1966, has sadly passed away at the age of 79 having fought against dementia for a number of years. 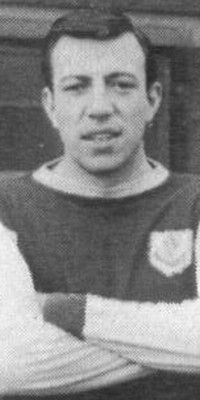 He made his Burnley debut on Boxing Day 1958 at Leicester  in a game that ended in a 1-1 draw. His final appearance came in the same fixture on 5th November 1966, this time disappointingly a 5-1 defeat.

Although Oxfordshire born, he’d moved to the North East as a child and it was there that he was spotted by Burnley scouts playing for Durham schoolboys. He signed as a junior at Turf Moor and became a professional in October 1957 on his 17th birthday while continuing to work as a draughtsman.

He made it into the first team as a regular for the 1962/63 season, making 40 league appearances and bettering that in the next season with 41. For three seasons he was first choice alongside Brian Miller in the Burnley team but in 1965/66 season he made just 13 league appearances.

By the 1966/67 season his first team appearances weren’t frequent but he scored his only two Turf Moor goals that season. The first came in a League Cup win against Shrewsbury but his second came on his West Brom debut when he gave us an early lead with an own goal at the cricket field end.

He went on to become a firm favourite with the West Brom fans and was in their team that won the FA Cup in 1969. He also lined up for them there in the League Cup Final a year later but on this occasion they were beaten by Manchester City.

It took the signing of John Wile to force him out of the team at the Hawthorns and he played his final game for them against Burnley in 1970 before signing for Belgian club KV Mechelen. where he ended his playing career.

He did return to England for a while but eventually settled in Mechelen where he passed away peacefully last night after his long battle against illness.

Our thoughts are very much with John’s wife Ena, his daughters Nicola and Debbie and his son Mark and their familes along with his friends at this sad time.