Just two this time at the Etihad 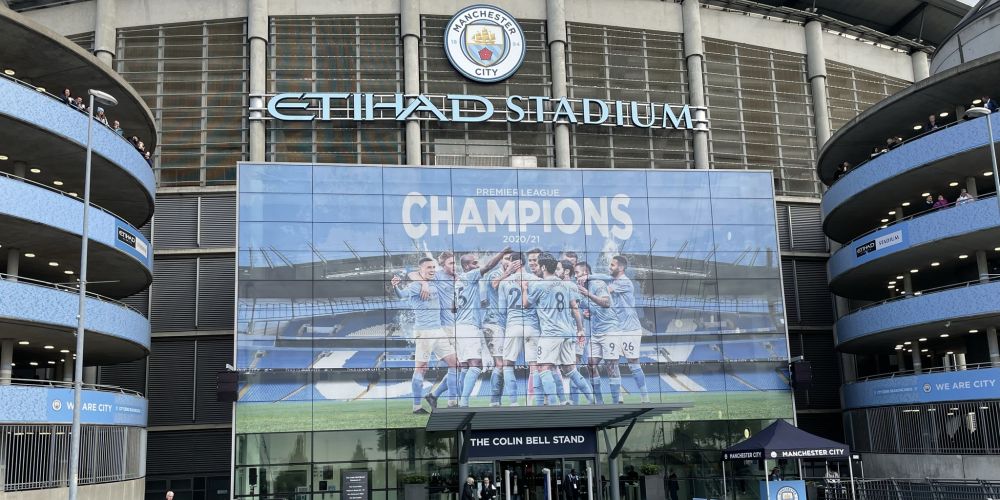 Goals from Bernardo Silva and Kevin de Bruyne condemned Burnley to a 2-0 defeat yesterday against Manchester City and an eight successive loss at the Etihad Stadium.

It’s not good. We are still waiting for our first Premier League win of the season but in terms of this fixture it is a big improvement given that all the defeats since the first of those eight had all been by three goals or more with the last four all ending 5-0.

The two things assured going to Manchester City in recent years is us getting hammered and drenched so thankfully, this time, there was no sign of rain when I left home for the rare treat of travelling to an away game free of charge courtesy of the X34 and a bus pass.

Apart from a hold up on the Edenfield Bypass, it was plain sailing and into a pub for refreshments on Deansgate not much after midday before arriving at the stadium around 45 minutes or so before kick off with news having come through that we’d made three changes to the team that had drawn against Norwich with Erik Pieters, Jack Cork and Maxwel Cornet coming in for Charlie Taylor, Aaron Lennon and Matěj Vydra.

Embed from Getty Images
We had seats in the middle tier, but it is all change downstairs with rail seats having been installed throughout the away section. Upstairs, there was time for quick conversations with The Athletic’s Andy Jones and former chairman Barry Kilby who had opted to take in the game from the away end with members of his family. The respect in which he is held was there for all to see with almost a queue of Burnley fans taking the opportunity to speak to him.

On the pitch, we started with fit again Cornet playing off Chris Wood up front, allowing Dwight McNeil to play on the left with Josh Brownhill on the right although that quickly changed with us moving to more of a 4-5-1 formation.

What also quickly changed was the scoreline. It took City just twelve minutes to go in front. Nick Pope could only parry Phil Foden’s shot from the edge of the box and it fell for Bernardo Silva, City’s best player on the day, to turn home from close range.

If we thought that was the start of the usual avalanche of goals in this fixture we were, for once, very much wrong. Yes, Manchester City saw a lot of the ball and had their chances but so did we at the other end.

Embed from Getty Images
There were three big opportunities for us. The first came from a superb Dwight McNeil ball forward. Cornet got onto it, got the better of Aymeric Laporte but just as he looked to get another goal against City, he could only fire straight at goalkeeper Zak Steffen before firing the rebound too high.

Cork got into the box on the left hand side. His ball in was blocked but came out to Josh Brownhill whose shot went just wide of the post and at this stage of the game we were worrying City and the goal might have come right on half time but for referee Martin Atkinson giving us a free kick in the centre circle for a Laporte foul on McNeil.

I think the yellow card was the correct decision but Atkinson, who otherwise had an excellent game, could have allowed play to continue once Ashley Westwood had played it forward. The referee, who I think is the second best behind Mike Dean in terms of playing advantage did, in my view, get this one wrong and our chance to equalise right on half time had gone.

City improved in the second half. They had even more of the ball and put us under pressure in spells, but we defended brilliantly as a team and particularly the two central defenders who were simply magnificent.

Embed from Getty Images
We wondered how we would cope in these last two games without Ben Mee, particularly bringing in  20-year-old in Nathan Collins with no Premier League experience. Collins did well against Norwich; he did even better in this game alongside James Tarkowski who was at his best.

It took City until the 70th minute to get a second. After they got possession in the centre circle, and I don’t think there was a foul on Cork, they moved it forward quicky for De Bruyne to cross the ball into the box. When Westwood couldn’t get it away, it fell nicely for De Bruyne who hit a left foot shot beyond Pope into the far corner.

That was surely it. You are always in the game if you are only one goal behind and it felt like this second had taken the game away from us. It had, although we did get one more chance, or so we thought.

From a free kick on the left, Collins headed it on but Wood, at stretch, could only fire over the bar. Had it gone in, it wouldn’t have counted. Collins might have been offside from the free kick, it was tight, but Wood would definitely have been given offside had he scored.

Embed from Getty Images
That was it. It ended 2-0, which in some way is better than losing 5-0 although neither of them get you any points. On the subject of Manchester City and 5-0 results, there was even a link yesterday. Later in the day, City’s under-23s beat Leicester 5-0. On the bench for City in that game was goalkeeper Ciaran Slicker who was one of two goalkeepers named for the first team bench hours earlier. Cole Palmer played the full ninety minutes in that game, scored a hat trick, having come on as a substitute for the first team just before the end.

At least we were able to walk back for the bus without suffering in the rain as has so often been the case at the end of this fixture. Just in time for the X43 too, so home at an early hour to catch some of the Brentford v Chelsea game.

Unfortunately, it’s another report where I have to say I thought we played well, but also that it’s brought us no points. There is absolutely no doubt that we are playing much, much better than the results would suggest but we have to start finding the net. Our strikers have scored one goal between them, that being Wood’s against Leeds. We’ve only scored four more, one from Cornet, one each from the two regular central defenders to add to Jamie Vardy’s brilliant header at the King Power.

This team is more than capable of getting out of trouble, but to do that we have to start winning games before we get cut adrift as the likes of Fulham, West Brom and Sheffield United did last season, and we know how it ended for them.

Embed from Getty Images
On the road again next to Southampton where we should have won last season having gone 2-0 up and where we should be more than capable of adding to the points tally.

I’d love to be writing about a win rather than just a good performance.