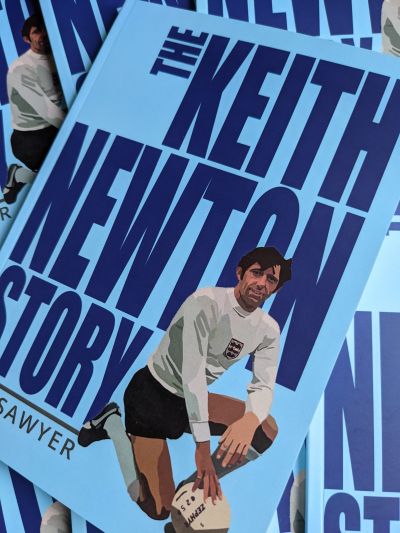 Keith Newton was undoubtedly one of the best full backs I ever saw play at Burnley and the only one who could play equally well on the right and left of the defence.

When he passed away just seven days before his 57th birthday in June 1998, it was said that he had been able to bring together the two East Lancashire clubs.

He’d started his career at Blackburn and ended it at Burnley. There were players, former players, directors and supporters of both club side by side at his funeral.

Some months ago I spoke to Rob Sawyer who was writing an article on Keith, who played 27 times for England. Between his times at Blackburn and Burnley, Keith played for Everton and Rob is an Evertonian. His article has now become a short book.

Rob told me this week: “It started out as an article but grew into something bigger. In the end I decided to produce it as a self-publicised short book. It has sixty pages of text and illustrations.

“I sought to do Keith justice and also raise funds for East Lancashire Hospice in Blackburn where Keith was cared for in his final days. All takings, after costs, will be donated to this good cause.

“The book is not a detailed blow-by-blow trawl through his entire career. It seeks to be an accessible read, highlighting his achievements and giving an accurate picture of the man, as a footballer and family man.”

The book is priced at £7 with an additional cost of £1 for postage (£1.50 for two copies). Please EMAIL Rob directly or contact him via Twitter at @robsawyer70 to order copies of the book.