His name had been mentioned but he always looked an outside bet. Now, Chris Waddle had broken the silence and revealed that he wanted the Burnley job and it looked as though an appointment was imminent. 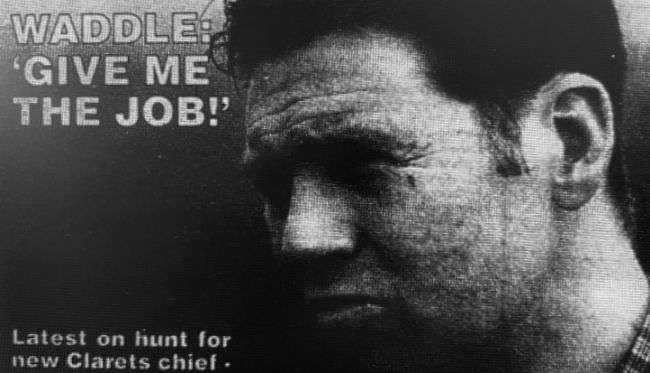 Contacted by the Burnley Express, he told them: “The Burnley job would appeal to me. They are a big club and I have always kept a keen eye out for them. They get amazing crowds and have a fantastic set-up and stadium. The club wouldn’t be out of place in the Premiership.”

Despite the noises coming out of Turf Moor, it wasn’t cut and dried but Waddle confirmed that his advisors were talking to the Burnley board and he added: “I get speculation wherever I go now with every job that comes up. My name is usually in the frame. I would be interested in the Burnley job but at the minute it is still speculation.

“The rumours that I will be confirmed as manager are a bit premature; I’m still in my house in Sheffield at the moment. There have been initial talks with my advisors, but basically it is up to Burnley to consider the situation. If they think I am the right man for the job, I am sure they will get on with it and get in touch.”

We weren’t the only club keen on Waddle. Hull, who had just been taken over in a multi-million deal, were looking for a replacement for Terry Dolan. Waddle said on that: “Hull made contact through my advisor Mel Stein. They haven’t met up with him yet but they seem keen. But I have said in the past that I would like to take a club like Burnley back to the top flight as a manager. And I received several letters from Burnley fans after saying that.

“They are a sleeping giant with lots of potential. They went close to promotion last season before fading away, and certainly I would be interested in helping them get back where they belong.”

Should Waddle land the job, he was expected to bring Glenn Roeder in with him as assistant and it was thought that if talks fell down with Waddle’s advisors that Burnley would then turn to Wrexham manager and ex-Claret Brian Flynn.

One way or another, the wait for a new manager looked to be almost over.