We turned Deepdale Claret and Blue

It’s 48 years ago today that we descended on Deepdale in our thousands to bring a momentous 1972/73 season, one that is a still a massive favourite for me, to a joyful end with a 1-1 draw ensuring we returned to the First Division as Second Division Champions. 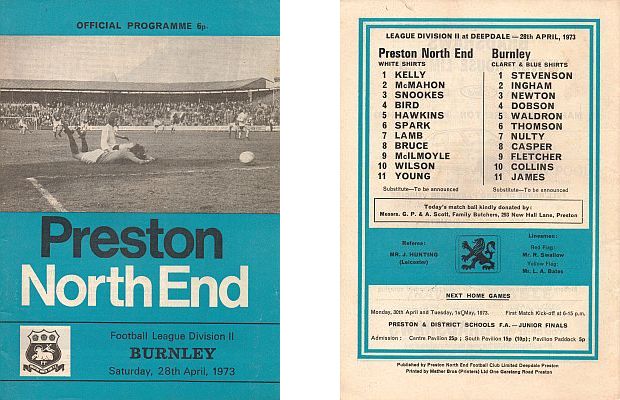 It was like an all day party for us that started when we caught the train from Burnley Central around breakfast time, offered champagne to travellers including one bloke who was going to work in Accrington. He almost got drowned in the stuff.

I might, on occasions, be able to remember football matches but where we stopped to partake in an occasional drink in Preston is now somewhat hazy, other than our final pint being at the Sumners. But I do know that we made Preston’s Deepdale ground a long time before kick off. In the days of pay at the gate we had to and we took our place on the Blackpool Road End which is, for younger readers, where the Bill Shankly Kop (away end) sits now.

We’d already clinched promotion but we needed a point from this last game of the season to ensure we won the title. As it happens, following a dramatic collapse in form, Preston needed a point to be certain of staying up. They were worried. They were most worried about Leighton James and so made a decision in the build up to the game to narrow the pitch by four yards to give him less room to play in. The new lines could be seen as could the lines that had been there all season. It was almost akin to an oversized Wimbledon tennis court lacking only a net across the half way line.

It was only the second time I’d been to Preston to watch Burnley. In the previous season we’d all been squeezed into the other end but this time it didn’t really matter where you went, it was just a sea of Claret and Blue with the only area seemingly taken by Preston fans being the small terrace to the side of the old Pavilion Stand. It was estimated that over 15,000 Burnley fans were there, it might have been more.

Eventually kick off time approached and the Preston North End team came out first and lined up to give the First Division bound Burnley team a Guard of Honour. Almost immediately the champions elect made their way out onto the pitch, turning towards our end to warm up (or to kick in as it was called then). The welcome from the Burnley fans was deafening for a team who had given us a season to savour.

As for the game, we very definitely didn’t get a classic, not by any means, but we got what we wanted. Right from the start, on a tense afternoon, we looked by far and away the better team. We weren’t at our best but we didn’t need to be against this Preston team. The home side struggled to come close to matching us in what looked as though it was going to be a goalless first half and their only tactic seemed to be to hit the ball as far down the pitch as possible and chase it.

We dealt with it all comfortably until two minutes before the break when they hit another long ball down their left. It was just too high for Billy Ingham to deal with effectively and he could do no more than head it straight up into the air. It fell just right for Alan Lamb who was clear of our defence. With us desperately trying to get back, Lamb ran 40-yards, pushed the ball to his partner Alex BRUCE who shot past Alan Stevenson from ten yards.

What a blow. The players went in for half time wondering what had hit them. We were all subdued and wondering whether, right at the death, we were going to let QPR in to win the title.

We came out for the second half and just had to take the game to Preston, not as if we hadn’t been doing in the first half. You sensed it might not be our day when Eric Snookes cleared a Paul Fletcher header off the line. Then, just eight minutes into the half, we scored the goal that won the title. From Frank Casper’s throw in on the left, Martin Dobson sent an overhead kick to the edge of the penalty area for Colin Waldron to head the ball forward. It seemed to have been another disappointing attack when a Preston defender headed it out, but it was only half cleared back to WALDRON who hit a 25-yard volley that simply screamed into the top corner.

Waldron, if you speak to him now, will always be happy to talk about the goal. Jim Thomson, in an interview with the Burnley match programme around three years ago joked: “I still can’t believe Colin Waldron scored the goal because he was bloody rubbish.” Straight after the game Waldron said: “Goal of the month? It must have been the goal of the season. I knew as soon as I hit it that it was a goal. The next moment I was being mobbed by the other players and then the fans came on and I collapsed under the weight of people. It wasn’t so much that it was a good goal that pleased me, but just because it was the equaliser we needed.”

Within a minute Doug Collins was within inches of firing us into the lead and almost immediately goalkeeper Alan Kelly denied Leighton James with a magnificent save. A Dobson shot was cleared off the line and Burnley were going for the jugular to get the game won. But there was then a sudden realisation that we didn’t need to win the game and we started to play keep ball. As the clock moved on, far too slowly for my liking I have to say, the Burnley fans were getting over the walls and creeping to, and then over, the touchline. Long before the final whistle I found myself in the six yard box, just about having a conversation with the underemployed Alan Stevenson.

The last few minutes were played out by both teams. Every player on the pitch knew their respective teams had got what they wanted. And then, the final whistle blew and within no time at all the pitch was filling up with jubilant Burnley supporters. Even Bob Lord, from his perch in the directors’ box waved down to the fans before the players arrived alongside him to take the cheers.

The game was over, the season was over, a season I never tire of looking back on, but the day most definitely wasn’t. I left home early that morning but I’ve no idea what time I got home. After a few more drinks, and even something to eat, in Preston it was time for the train home and a night out in the one Lancashire town where it was party time.

We were going up as Champions and deservedly so. QPR won too and moved to within three points of us with one game remaining. They couldn’t catch us now. It had been our day. It had been our season and Burnley were heading for the top table of English football once more as champions.

Elsewhere, Cardiff had dropped back into the relegation places but had games remaining which meant it could still be Huddersfield to go down with Brighton. If so it would be relegations in consecutive seasons for the Yorkshire club. The small number of Preston fans went home at least knowing they would still be in the Second Division for another season.

« Big defeat for youths
Defour was happiest at Burnley »