We went to York in our thousands

We’d waited seven long years for this night, from the day we were relegated to the Fourth Division in 1985 until this wonderful night at York thirty years ago today when a 2-1 win won us both promotion and the title.

Fingers were being pointed at ambulance crews when there was a delay in reaching a six-year-old boy in St. Matthew Street in Burnley. It took them twenty minutes for a paramedic crew to arrive according to ambulance union members but management said it was only ten minutes. 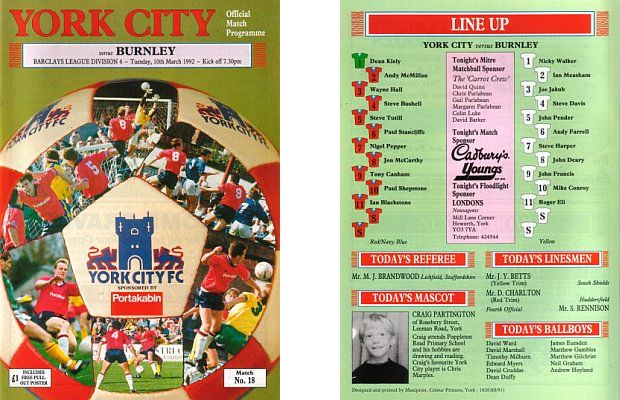 Sadly, the boy died with local union officials reporting that a back up emergency vehicle could have been there in two minutes but no longer having that option, it meant other stations having to be mobilised.

A newsagent’s shop in Harold Avenue was raided with a 16-year-old assistant threatened at knife point. Thankfully, although badly shaken, the assistant was unhurt but the two young men, aged around 19 or 20, got away and the police were given good descriptions of the pair.

The Burnley Express had suggested that Batman and Batwoman had been in town, but that wasn’t strictly true. It was a successful bat hunt led by Burnley Borough Council ranger Mick King and environmental awareness official officer Annette Powell. It was centred around the Weavers’ Triangle. Mr King, who gave an illuminating talk, said the intention was to show people how friendly bats were, and not the horrible vampirish creatures as they are so often depicted.

Chas Young and Son Jewellers had been in Burnley for many years. It was initially in Church Street, having been converted from a pie & peas shop, but then moved into Keirby Walk where it was still open in 1992. The business had been in Burnley for over half a century but Mr Ronald Young, who had retired in 1976, had sadly passed away on holiday in Tenerife at the age of 82. He’d been heavily involved outside his shop in Burnley and founded Burnley Cine and Video Club.

Mrs Miriam Rathore had written to the Burnley Express about the opening of sex shops, but far from being against them, she was very much in favour and declared that sex and nudity should be part of everyday life in the 1990s. “Nudity is nothing to be ashamed of,” she said. “I have memories from my childhood of my mother drying and dressing herself in front of the fire, after she had had a bath, in front of us.”

Ahead of the big game at York, postponed on its original date due the sad death of apprentice Ben Lee, Jimmy Mullen said he was hoping to have a fully fit squad. “We don’t want to keep things lingering any longer than we have to,” he said, adding: “We know what we’ve got to do and we’re going all out for the win we need.”

I was on driving duty that particular night. We couldn’t leave too early due to picking up my old friend Brian Lucas from work in Colne which then meant taking the route via the A59, through Harrogate. I can tell you that it was a crawl with so many Burnley fans making the journey and had kick off not been delayed then we would not have made it in time. Thankfully, kick off was delayed for half an hour and we had seats in the main stand at Bootham Crescent so were able to get straight in on arrival.

It just so happens that in the long history of Burnley Football Club, Turf Moor had housed the First, the Second, the Third, but never the Fourth Division championship trophy. Nobody who was at York to see all that change on April 28th will ever forget that terrific Tuesday night. So many were there that the referee was asked to delay the kick off. More than seven and a half thousand were packed into the ground, most of them at the visitors end.

Outside, the wave was lapping the stadium. They’d waited seven years; they could wait a little longer. We were used to big crowds you know. The only Burnley folk who weren’t in party mood were down in the dressing room. They’d set out on their incredible journey on August 17th, eight and a half months later they arrived and how.

Burnley had three cracks at clinching the championship, they needed only one. There was a sense of occasion, a sense of achievement in the air even before kick off. What Frank Casper had started, Jimmy Mullen was about to finish. He’d experienced promotion twice before but he’d never experienced anything like this.

Mike Conroy was close to giving us the lead with a header which went just wide of the post and then Dean Kiely saved well from Steve Harper. But then, just two minutes from half time, disaster struck. There was space on the edge of the box for Jon McCarthy. He shot, David Williams couldn’t hold it and Ian BLACKSTONE put York in front.

It was the simplest of chances for Blackstone with Williams parrying the ball straight to him and the York forward just had to place the ball into the empty net from around eight yards out.

Early in the second half there was a handball by a York defender just inside his own box under pressure from Mike Conroy. No penalty though. There has to be intent of course. There was certainly contact and I’ve seen them given.

On the hour with Burnley well on top, Kiely kicked out but the ball was won by John Pender for Burnley. He headed it forward and it led to Conroy flicking the ball over his head from just inside the centre circle for Robbie Painter to run on to.

As the ball bounced, Kiely lost it. Painter was denied by Steve Tutill but coming in to finish it, Deary, John DEARY had equalised. Kiely had a real swing at Painter, but it was himself he should have been angry with. Painter tried to head it in, Deary arrived late at the scene of the accident and smashed it in off Painter actually. Kiely took a kick at Painter so Deary decided to have a push at the York goalkeeper. Incredibly, Deary was booked and Kiely got away with it.

It was one way traffic now. Andy Farrell just couldn’t get through and then John Francis was denied when the keeper saved well.

We reached the ninety minutes with the score still 1-1. That was enough to win us promotion and then. We’d played around three minutes of stoppage time. Here goes Conroy, still time for a winner maybe. It was a terrific run, John FRANCIS.

WE WENT TO YORK IN OUR THOUSANDS, WE CAME HOME AS CHAMPIONS

What an end. York tried to play the ball across the pitch but Joe Jakub won it and found Conroy charging down the left wing. It really was a terrific run and at the end of it he crossed for Francis to bundle it home from close range before jumping on the fencing in front of the Burnley fans behind the goal.

Those fans were now under starters orders, the pitch invasion would be off any moment. The final whistle blew, the fans came on from all parts of the ground. That was it, Burnley were number one again. The trans-Pennine invasion occupied the scene of the club’s finest hour in years. They were going to paint the City of York Claret and Blue.

What a wonderful night. If we hadn’t turned in our best performance of the season, we’d played with great pride, given it absolutely everything and had dominated for virtually the whole of the game.

Despite going behind just before half time, we absolutely murdered York in the second half. They had no real answer to us and it was fitting that we were able to score that winning goal. Without it, we were promoted, with it, we were champions and deservedly so.

The Burnley fans at the end, demanded the players return. They did so in the stand, with Mullen, King James the First of Burnley. He was lifted onto the shoulders of the players.

The night also had to end with thanks for York City Football Club and the police who did everything to ensure all those Burnley fans who had travelled were able to get inside Bootham Crescent. Home fans were moved to allow new sections to be opened to travelling Clarets and help make it such a special night, one that I’m sure remains always for every Burnley supporter there.

I can confirm that our journey home was trouble free. While there was tension on the way there, it was nothing but joy on the relaxed journey home.

We’d still two games to go, one at Rochdale two days later and then the finale against Wrexham when it was hoped the trophy would be presented.

Jimmy Mullen’s Claret and Blue Army had finally got us out of the Fourth Division.